Here is a poor video of the flight: 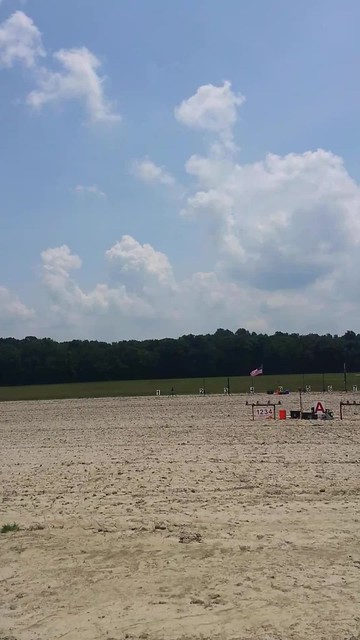 It appeared that it hung on the rod. There was some twisting, but I'm not sure if that was a root cause or a symptom.

The hang could have been due to: A misfire (but all motors lit); delayed ignition (possibly), misaligned motor mount(s) (possibly, but they are as straight as my three other forward canted motor rockets).

One interesting observation is that the First-Fire igniter tube that I used as a lug is a bit loose on a 1/4" rod. I've successfully used many of them. However, this one is shorter than the other lugs on my forward canted clusters. It is also well behind the motors. On my other similar rockets, the lug extended past, or was well ahead of, the canted cluster. I have experienced a rod hang on a loose, short lug. So, I'm thinking the angled (and possibly asymmetrical) thrust of the canted motors caused a bind.  There is one other factor that I think came into play. On the next flight, I loaded a rocket with a 'real" 1/4" lug. Before it reached the tape stop from a previous launch, it stopped. I found that the two inches or so above the stop was *very* sticky. There was probably tape there at the previous launch and the nice hot weather made sure the remnant adhesive was quite gooey.

I think I'm going to retrofit a second lug at the top of the body and come up with a new nose. I have a plastic Frankenstein head, so I could call it the Mercury Frankenstone (?)

Email ThisBlogThis!Share to TwitterShare to FacebookShare to Pinterest
Labels: My Projects - Mercury Redstoned