I bought a Leviathan almost a year ago while they were on clearance at Estes. I really don't need another 4FNC mid-power rocket in the fleet so it has just been gathering dust. However, I am having building withdrawals so I went ahead and started on it. I briefly considered its potential as an odd-roc or maybe a Big Brute downscale but so far I haven't found any inspiration.

I am currently building the motor mount backwards from the stock instructions. Not to mount a motor backwards (now THAT would be odd) but to allow the rear centering ring to be left off as the build progresses. I need another cluster even less than I need a single 29mm rocket but I don't want to preclude it. With 2 centering rings and through the wall ply fins, you don't need the rear ring that badly and I might stuff in some additional tubes.

I found a scavenged recover harness that will be attached through the top ring. Once scavenging, I am using a Big Daddy cone that has the long angle area chopped off and a bulkhead installed. It could be moved between rockets...and I'm fundamentally lazy. 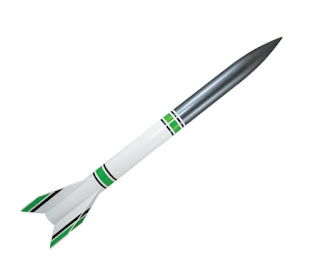 Email ThisBlogThis!Share to TwitterShare to FacebookShare to Pinterest
Labels: My Projects - Estes Leviathan