After many months with breathless anticipation, the Estes SpaceShipOne® finally arrived (circa 2005, this is a republished review). This kit is a 1/30th sport-scale kit based on a BT-200 tube, which is 2" in diameter. This was the first time I noticed the SS1 being attributed to Mojave Aerospace Ventures vs. Scaled Composites. There are some issues for the scale fans out there. For instance, if you look at the rear nozzle, it looks like the test flight configuration, however, the markings appear to be those on the final X-Prize flight. Still, the resulting kit looks pretty sweet and I'm really glad Estes got it out. 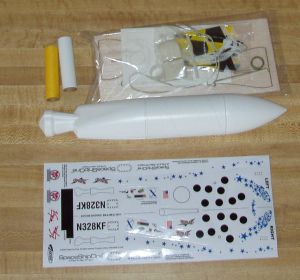 The first step is to assemble the motor mount. This is a typical build and consists of the BT-20 motor mount, two centering rings, an engine hook, a Mylar retainer for the hook, and a motor block. I used carpenter's glue as recommended. Be careful when attaching the centering rings as they are oblong and have to be aligned properly. 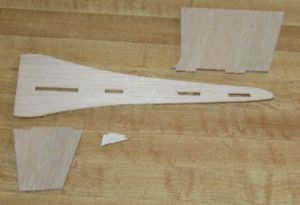 Next, I removed and sanded the fins then filled them with Elmer's Fill 'n' Finish. It was nice having the laser cut fins for this model since the various fin components are aligned via slots cut in the long vertical fins. These precise cuts really help ensure the proper alignment of these parts. However, the cuts were not all the way through the balsa and the bottom side must be cut with a hobby knife. The most challenging aspect of the fins is that the root edge has to be beveled 60 degrees. A reference guide is provided, but I found it challenging to get the angle right along the length of the fin. A slicker modeler would no doubt have or come up with a jig to simplify this step.

I attached all the fins with Aileen's Tacky Glue starting with the side fins, then the long vertical fins, and finally the side fins. I am glad Estes provided the wing assembly fixture, however, with a tad more cardboard they could have provided one that actually supports the wings. This would not be a cost driver. I had thought the fins were set, when I decided to go up to bed. This was a mistake as the fins sagged a bit by morning.

The tail cone is capped on both ends and thus must be trimmed using a razor saw. The instructions say to use plastic cement to glue the mount into the tail cone, but I substituted Gorilla Glue (sparingly) in its place. Before installation in the main body tube, I epoxied a two-foot section of Kevlar® twine onto the mount through the top ring. I also attached the tail cone to the body tube using 5-minute epoxy in place of the recommended plastic glue.

The final touches included the launch lug, adding the clay nose weight, and tying the Kevlar® to the rubber band and the latter to the nose cone. 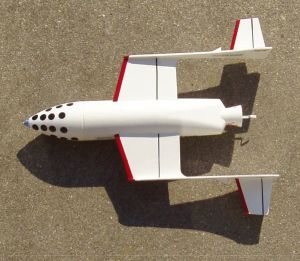 Finishing:
Finishing was typical: fill, prime, paint, add decals, cover with a clear coat, etc.  The model is mostly white with red trim on the leading edge of the fins and the bottom tip of the nose cone. There isn't guidance on the exact color or the location of the red areas, so a scale aficionado will want to do some research here. Personally, I eyeballed it using the picture on the package and my cardstock SSI model. I also opted for brush on paint vs. the recommended red spray paint.

The self-adhesive decals were stiff and didn't conform well to the nose cone. The precision of the cuts was also so-so. For example, some of the star patterns were truncated when the patterns were cut. Finally, a bottom view of the model would have helped in positioning the decals. To end on a positive note, I am glad the decals were peel and stick instead of water slide. I undoubtedly would have ruined a couple had they been the latter.

I think the resulting kit looks nice, but even though I am not a scale fanatic, it bugged be that there was a mismatch between the nozzle configuration and the markings and that there was not better guidance on how to position the decals.

Flight/Recovery:
There was much discussion about stability on The Rocketry Forum (do a search for SS1 stability). Rather than repeat lots of information here, I will just say that Estes now recommends adding an additional ½ oz of nose weight.

The recommended motors include the B4-2, B6-2, and C6-3. Due to the size and weight of the model, I opted for a C6-3. The instructions do say to launch with "little or no wind." When I launched it, the wind was about 5 mph. The model weather cocked a bit but not badly. The added weight did the trick even with my method of finishing the fins and the wind. I used the stock chute and the model recovered without damage on soft, plowed ground.

The second flight went well. This time, there wasn't much weather cocking and it exhibited the typical swooping behavior that you see on winged rockets after motor burn out. The third flight, also on a C6-3, made a right turn at about 15' and flew off into the woods. I never found the model so there was no autopsy. It wasn't very windy so maybe the nose weight came loose.
Posted by rstaff at 12:03 AM