Rockets Magazine is a keeper! 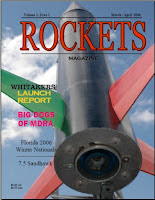 Although I haven’t read every word twice, I think I have seen enough to write this review. Rockets Magazine does indeed meet my expectations (it didn’t exceed them only because I had seen the preview and had very high expectations).

Volume 1, Issue 1 is 50 pages deep and packed with interesting, quality material. The material is well written and the many photos are spectacular. It includes what appears to be eight regular features…

When Rockets won the contract to be ’s journal, some people were immediately asking if this would merely be an East Coast publication. Not unexpectedly, Issue #1 was largely that. Much of this material was gathered in anticipation of a win, i.e. before there even was a magazine. The editors will continue to have access to a lot of material in their own backyard and I am sure they will cover some events nation wide. However, Rockets has the same problem as all other rocket publications: they need quality submissions from rocketeers across the country. You can’t print what you don’t have. I know they will rise to the challenge, but they will need help to succeed.

Keep the pointy-end up and the fiery-end down guys!